The experience of an artist who have leaved the country

Spain has lost its “S” and now the name of the country is Pain. To lose the capital letter of a name implies to lost the main position for the citizen of this country. Spain has lost the “S” as in Self-confidence.

In the “S”seventies the dictator Francisco Franco died. During the forty years of the fascist regime, Spain hide away from the world and so did the individuals who grow up in that situation. The only thing that Spain offered was “S”-un to tourists. 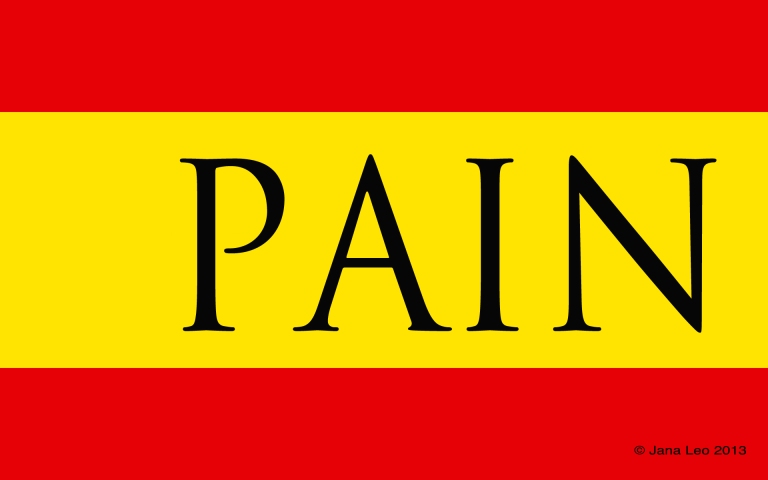 Born in the sixties, as a young adult in the eighties, the trips to other capitals in Europe, London, for instance, were not related to culture but to child control. Other reasons to visit London was the prospective of learning a language that offers the hope of a passport to the world. At that time Spain wasn’t part of Europe (the European Union) and working in England for the Spanish was illegal. Whether the Italians at the time could work in the front as waitresses the Spanish  work as hotels´maids cleanings rooms. It was the eighties and there was no work in Spain -literally no work- the line of the unemployment office was the everyday life of young people who wasn’t going to university and it was so present in life that appears in the lyrics of songs

Twenty years later, slowly building, getting a way from the load of being Spanish, sense of inferiority, insecure, with not much structure to back up and then Bump! Here we go again!

Now, the cafes, hotels and restaurants of London, have Spanish working in the storefronts. Now they are working legally and they are visible, but still they are there because they found no work in Spain. Now these workers have better education -two languages, are older than the generation I have mentioned before, they are in their late twenties or early thirties and they have university studies including bachelor and master. Those born in the eighties have been able to travel to Europe thanks to the university exchange programs, Erasmus, that was a real success in making possible mobility through Europe but now is excluded in the new education reform. The abortion packages weekend to London will become a trend again. The Partido Popular have made abortion illegal, and categorized it as something that happens only among the poor.

It seems to be a paradoxical situation, one impoverishing the country and then fight against the poor. This remembers me of the very hard laws that the German imposed in the Jews. One can say that all fascism is economic, but still the political party in Spain seems to be a clear case of economical fascism. The Spanish government is imposing hard laws in the poor including a fine of 30.000 to insult a policeman and a 600.000 fine for start a protest beyond the usage of brutal police force against protestors. Some of the Partido Popular policies are not direct, but their mission is to strangulate the poor professional workers and incipient middle class. Related to the economical battle to work as freelancer one has to pay monthly around 300 euros what is painful when the works is very scarce; the taxes to transmitted proprieties went up, the percent actually went down a % but now the taxes is calculated not by the price paid but by the pricing list made by the Comunidad of Madrid. With real state values going down the base is 300 per cent of of the paid price. Some people cannot claim the property they inherent from family members because they cannot pay the taxes.

I am using the flag of Spain, because Spain is a Monarchy and there is an obligation from the king to control that the changes introduce by the political party changes is following the constitution. Any protest at this time against ant constitutional measures in Spain should go against monarchy, since the King is not doing the job.