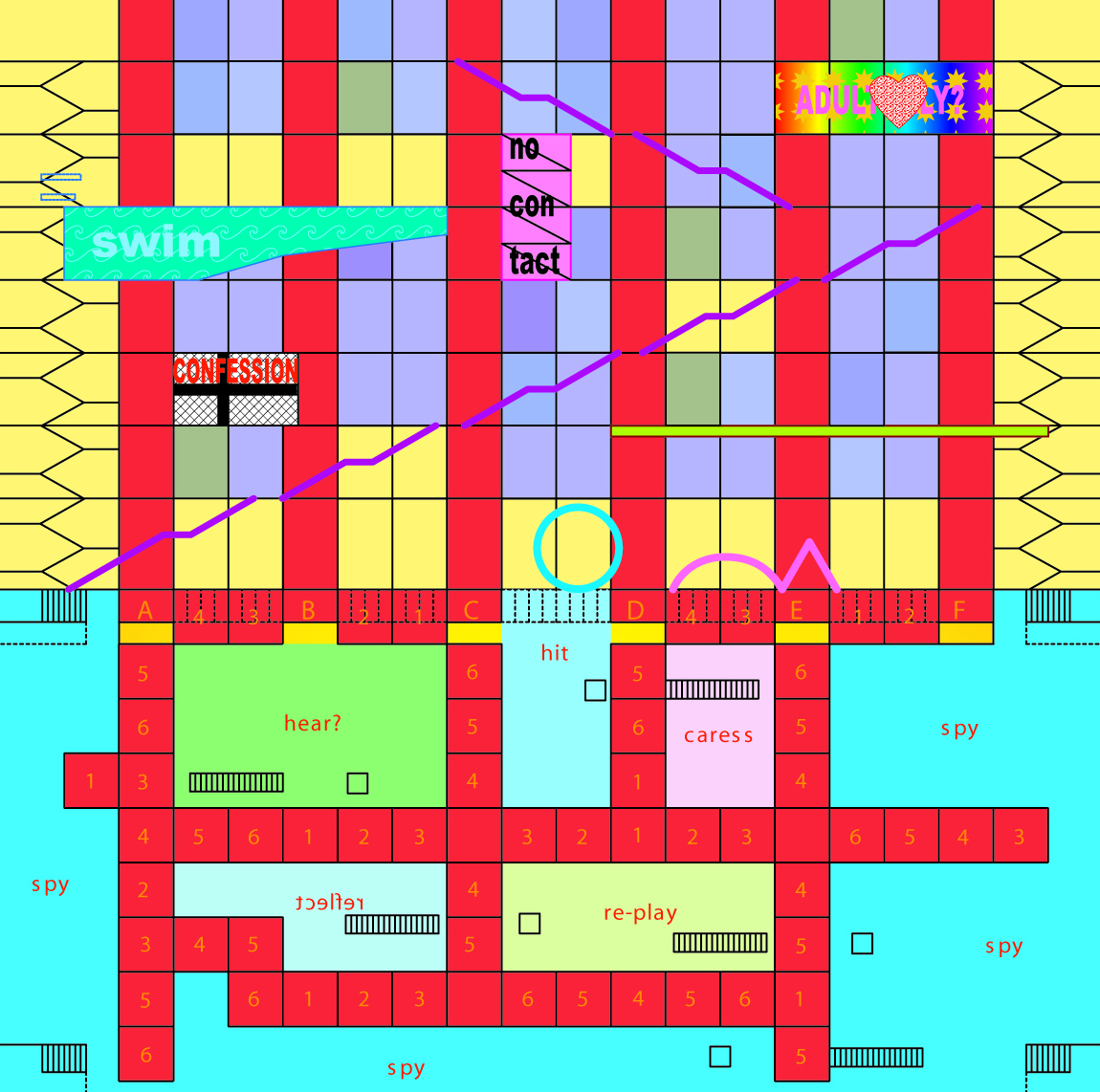 In contemporary life, with its need for efficiency and safety, its lack of time, the paranoia about contagion, its new moral constrains, etc., some ways of communications have been pushed to the corner and others have been strengthened. I believe one of the big lacks of our contemporary world is direct and personal communications. More and more, mediated, unidirectional, and virtual communications have been increasing a big deal in everyday life. Anonymous and undefined encounters among strangers are constrained to its virtual forms.
I believe that in order to happen, have to be organized and need to have an appropriate space.

COMMUNICATION LAIR, a building for egalitarian, undefined, anonymous and unexpected connections among strangers. Communication Lair is about the need for program´s research in architecture: Can a building create a use? Can Architecture push tendencies, create habits and change behaviors? How could this happen?
– The only fact that the program exists make public its use
– The creation of the space facilitates the use
– Through design, Architecture can increase the value of what it houses.

The uses, certain communication exchanges, so far don’t fit perfectly in our society: otherwise there would already exist a specific space for them. If there is a relationship between a society and the possibilities of its architecture, this can be an investigation of some of their current limits. I would like to see if architecture can help inhabitants to escape from moral, economical, social or any other constrains.

The  starting point is to look at spaces where the main goal is to establish some kind of communication with  special emphasis in spaces that push anonymous communications such as Hotels, Bars, Chat ‘rooms’ (internet), Sex-shop Private Cabins, Confessionals,  etc…Followed by a twisted recreation of existent architecture models of public intimacy, can be see in  VIRTUAL ENCOUNTERS and PRIVATE CABIN.

The following step will be to look at places where public intimacy  (intimacy  in public spaces) take places, such as a public bathrooms or park. A visit to anonymous private pleasure spots on public places is recorded in the series BATHROOMS. WINTER GARDEN is a recreation of the structure of the public intimacy in the park inside a public building.

THE PARK INSIDE A BUILDING, or WINTER GARDEN 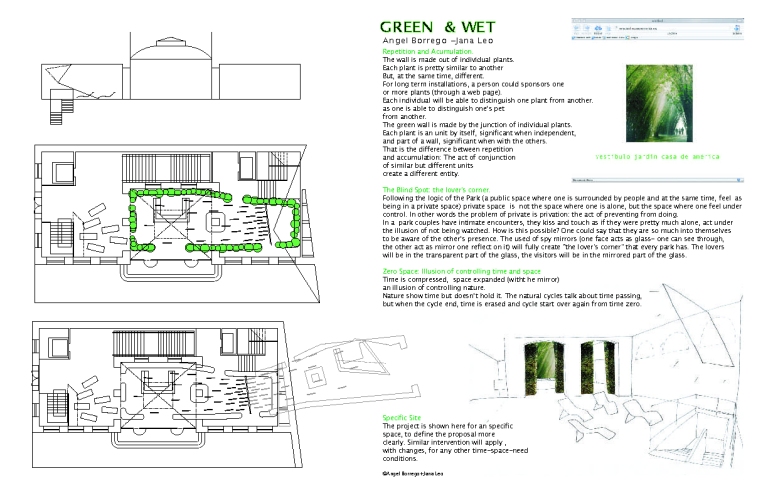 A BOOTH FOR INTIMATE COMMUNICATIONS INSIDE PUBLIC BUILDINGS

Where is the bathroom? where is the sex-room? A place to exercise: the gym, a table for ironing: an ironing table, a room to take dinner: dinning-room,…..places related to actions, actions socially approved that can be named. …Sex doesn’t have an specific site, there is not such a thing as sex-room, or sex booth. In a way is free from the restriction of the site and in the other its lack talk about the repression associated with sex.

This booth is a prefabricated construction, made out of 3 modular pieces
(one central wood with two plastic fingers) of 2 meters long each other that will be screw together on site. The piece is 6 meters long by 1 meter wide by 2 meters height. This is the minimum dimensions, and it could slightly vary depending upon wood panel standards.

The structure is made out of lumber (around 8cmx8cmx200cm height) . It is located in the outside of the booth and it the same for the 3 pieces. The panels screw to the structure are made out of plastic and wood following the
next sequence: plastic on the left, -wood on the center, and–plastic on the right ).

The plastic is a semi transparent- semi opaque plastic and will be screw to the structure from the inside (around 0.3 to 0.5 mm) there is a material that look like cellular policarbonate but is white, not really transparent. The
wood panels ( around 0.8cm) will go also screw to the structure form the inside.
A door made a out of the same plastic is located in both corners of the construction. A pushing door, made out of two pieces of plastic is located in the intersection between the plastic and the wood piece, we need two of those.

A double frame is located in the central point of the booth and it will be used to hold and keep tense a latex sheet. The size of this frame will be the interior of the section. A powerful fluorescent light will be screw to the central beam in the plastic finger.

The installation is a recreation of a peep show cabin with the unusual characteristic that it shows what is happening inside (usually the girl exposes herself to the client; whereas here, the client is also exposed to the public). In the back room of the gallery, a video camera records two people in a ‘private situation’ that is then displayed on a monitor in the gallery’s front room. The viewers can choose between having the experience of the peep show themselves and watching the interaction of the strip-tease girl with the client. There is a second video camera that records the reactions of the viewers as they realize what is happening. Finally, there is a camera with an automatic motor (set up on a tripod in the back room of the gallery, which serves as a sex-shop), which takes regular black and white photos that will later serve as evidence of the installation, but which will also constitute a piece of art work in themselves. The installation runs for five days. The videos and images are edited and put on display for the rest of the show. The space was adapted by Carlos Rodríguez, interior designer. 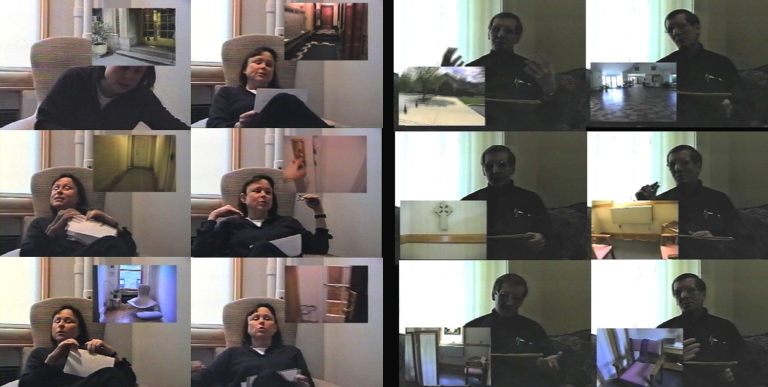 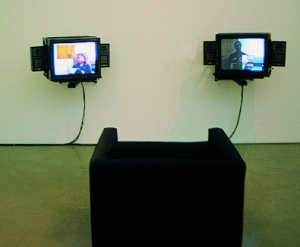 THE CONFESSION, A CONFESSIONAL AND A PSYCHOLOGY OFFICE
The confession is understood as one of the most private talks that usually happen between two people. At the same time Confessions are regulated through professionals that do not keep a personal relationship with the confessing person such as a priest or a psychology or a police. Confessions happen also between unknown people. With the confession we find this contradiction between the very private nature of the conversation and the lack of intimacy between these two people. Confession is associated with the “other” of us, with what we do that is not known to all.

“Double and Split” The living room is duplicated and split. In one location: a person, a screen. A video camera, a projector and a chair and same, displaced, 10 feet of thousand miles in another location. Two people virtually connected are free from each other presence but also lack it. Three virtual encounters took place in the constructed situation: A domestic partner-(all I need it is to be connected). A confession, secrets are shared more easily when there is not full contact (that the origin of the confessional). A sexual intercourse with an image (sex is fantasy)

In current living “public” and “intimacy” are together while the individuals are separated. Virtual has and strategy: separation. Separation between activity and space: Intimate activity on a public space or public search from a private space. Separation between location and space, an Internet address does not have a geographical location. Together but separate, separate but together: the body is split from its activity. It is freedom or incompleteness?. If connection with “the other” take place in front of a computer screen, if living is something that need a portable laptop and airport and not a room, what is the point of having still living rooms in our apartments? What is the meaning “ living room” if the contact with “others” is not alive, if the space it is not necessary, if it doesn’t have a function could still exist? If the space is gone is Architecture, also now days disappear?

Work on concepts related to public intimacy is available in the book El Viaje sin distance, only published in Spanish. For those reading Spanish here are some text on these concepts. 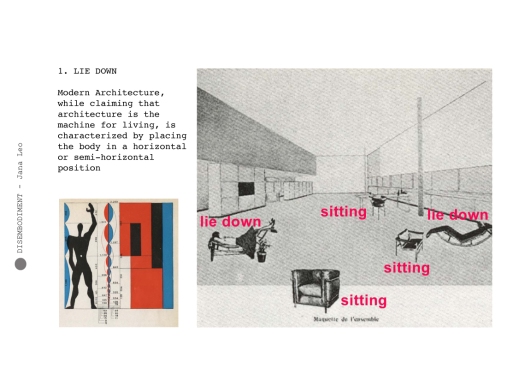 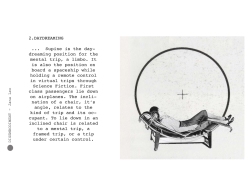 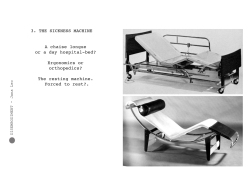